ETH vs. BTC: A change of scenario in the futures market has left BTC at #2


The Metaverse is not and will not ever refer to one company or one virtual world – it will be like describing the World Wide Web as a single webpage or labeling social media as only Facebook.

User-generated content (UGC) is the lifeblood of all networked services. Without imbuing users with free rein to create their own web pages, the World Wide Web would not grow to the degree that it is right now. Virtual worlds are not an exception: just like how people will not use Facebook or Twitter if their friends or favorite content creators are not there, people will also not visit a virtual world if there isn’t sufficient UGC piquing their interest.

However, existing 3D editors (e.g.: Blender, VoxEdit, etc.) require specialized expertise, such that it locks out ordinary people from the creative process. As a result, a large skill gap remains to create one simple 3D asset for use in a single virtual world, let alone across the Metaverse. 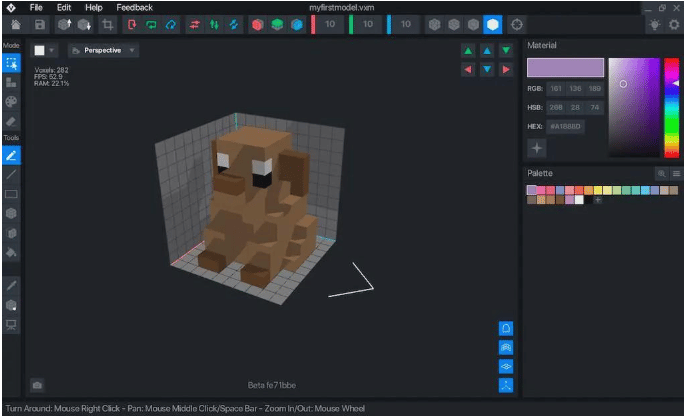 A thriving UGC base is of paramount importance for the Metaverse to become widely adopted. The more people participating in UGC creation, the more UGC will be generated, which attracts more users to virtual worlds (and with it, the Metaverse).

The Metaversal 3D Toolkit for the Masses 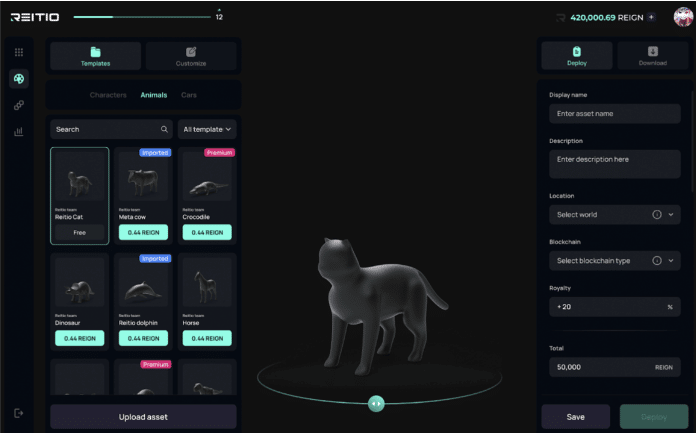 The root cause of Reitio’s existence is simple enough: creating even a half-decent 3D asset carries a steep learning curve, which locks ordinary users from participating in UGC creation, hindering virtual world adoption.

With this in mind, Reitio is built from the ground up to eliminate the steep learning curve associated with creating a 3D asset, empowering users to create 3D renditions of their imaginations and bring them to life in their virtual world of choice, instead of getting intimidated before they even started.

Being a fully web-based solution, Reitio’s mix-and-match, templates-oriented approach to 3D design ensures that the toolkit is intuitive enough to be picked up by anyone within a few minutes – the Canva for 3D assets.

Modular 3D Legos at your Fingertips 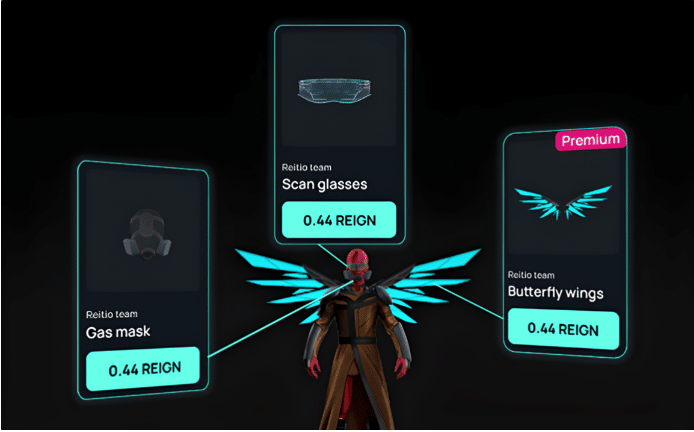 A Reitio-generated 3D asset is fundamentally made up of templates stacked on top of each other – like Lego blocks. Templates come in different flavors: free default templates are provided in-house by our internal designers, while premium templates are listed by community contributors or our virtual world partners, whereby each instance of usage will subject users to a pay-per-use royalty payment to the template creator.

The whole design experience is comparable to creating Lego structures: users start by choosing a ‘base’ template, then gradually work their way up – the extent of what defines a “finished” 3D design will ultimately depend on the user itself, just like the extent of what constitutes a “completed” Lego structure will be in the hands of that structure’s builder.

This design philosophy is what allows Reitio to be extremely user-friendly without sacrificing much of the variability and extensibility offered by more complex fully-fledged 3D editors.

A Novel Stack Primed to Serve the Next Digital Frontier

The current landscape imposes a steep learning curve on ordinary Metaverse participants, such that it locks them out from participating in generating UGCs for the Metaverse.

Reitio is developed from square one to fill this gap: a codeless, no-download, on-the-web 3D design tool so intuitive that it will only take users no longer than a few minutes to get a hang of it and generate their first Metaverse 3D asset.

“At the current pace of UGC generation, the Metaverse will never reach the critical mass of users needed for mass adoption,” said Emerson Li, co-founder, and CEO of Reitio. “User-generated content is the beating heart of the Metaverse – Reitio will allow anyone, regardless of background or experience, to create their own fully customizable 3D assets and bring them to life on their virtual world of choice across the Metaverse.”

Disclaimer: This is a paid post and should not be treated as news/advice.

APEs are whaling around now and this means…

XRP may uphold its strong bullish bias ONLY if this happens