BNB: This new update can be a game changer for profit-seekers


Over the past few years, Ripple has partnered with different banking and financial institutions across the globe to offer its crypto-powered financial services.

This, in order to enable better payment systems. Well, the most recent is the launch of XRP-powered payments in Brazil. Though Ripple is pushing hard to increase its global adoption, XRP’s price action does not correspond to the developments.

Moreover, the CEO of Ripple said recently that they are focusing on taking CBDCs as the future of fiat currencies.

“We’re focused on tackling CBDCs as the future of fiat. Key to this will be our work with central banks that support the direct exchange of CBDCs on XRPL, using XRP as a bridge currency”
– Brad Garlinghouse, CEO @Ripple$XRP #FinTech
👉https://t.co/ICQxJNqPJE pic.twitter.com/xgQMnaXhcu

Though one of the reasons for this price movement can be the on-going lawsuit that Ripple is fighting, on-chain metrics reveal several more.

The price drop was followed by a decline in XRP’s total active addresses along with the trading volumes. Thus, indicating an outflux of investors from the blockchain. 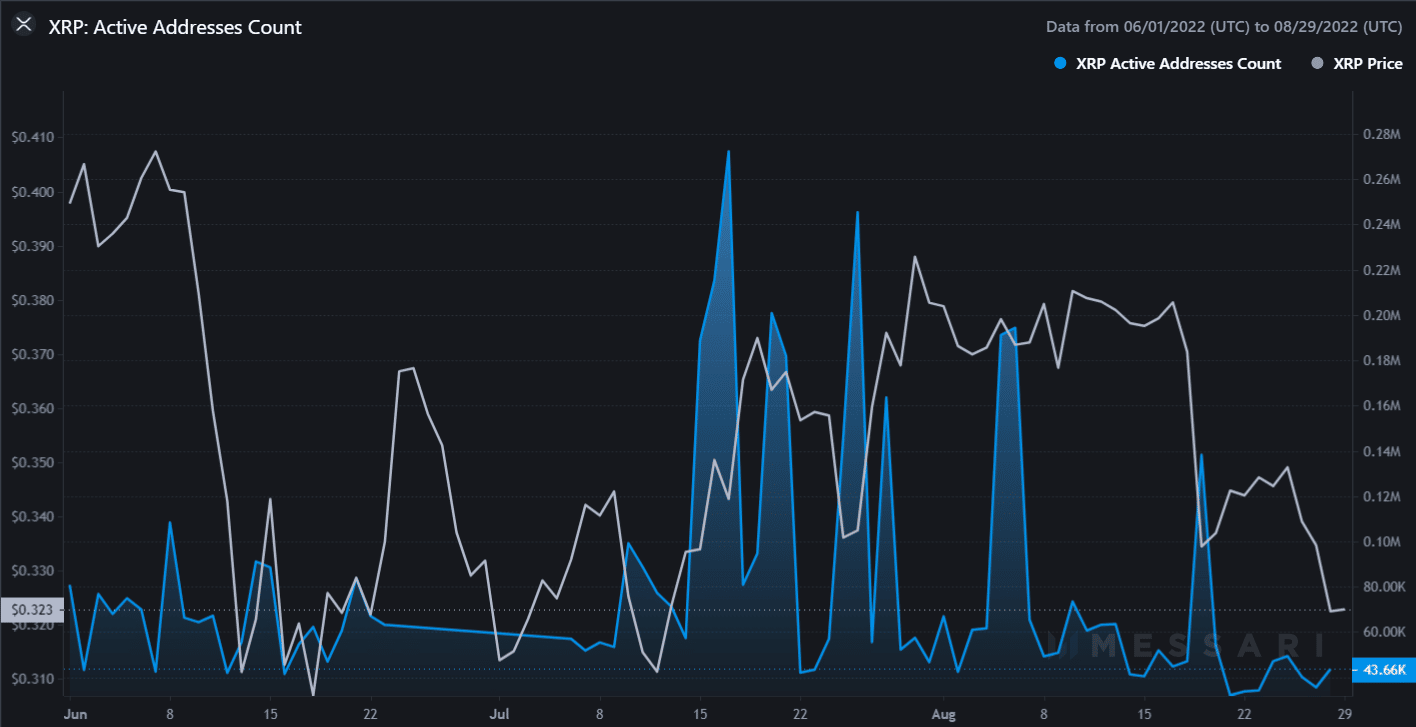 XRP’s scenario suggests harder days in the coming months. As the volume and active addresses declined, the community’s interest in the crypto also suffered. This was evident from the fact that XRP’s social dominance gained southward momentum since the price plunge.

Here is what to expect

XRP’s 4-hour chart painted a similar bearish picture of the market, with most of the longer candlesticks being red.

According to the Exponential Moving Average (EMA) ribbon, the 20-day EMA was well below the 55-day EMA, suggesting considerable advantage for the bears, which might further push XRP’s price downwards in the days to come.

These findings were supplemented by MACD and CMF’s readings. Both indicators pointed that investors can expect a possible decline in price.

Well, the metrics coupled with the market indicators suggest investors should plan long-term for XRP.

AVAX partners with LINK; can the integration bring much-needed respite to both