Axie Infinity has been feeling the bearish heat of the market recently. The GameFi-based protocol has been pretty active among the Twitter chat boxes recently after the release of the latest news.

In its latest roadmap, Axie has launched Origin Season 0 which marks the transition into Phase 3. This launch will welcome new updates for the new-look gaming experience on Axie.

Season 0 will last for a total of 30 days and will then mark the beginning of Season 1.

We are working on a balancing patch towards the end of this week.

The patch will have adjustments to a variety of cards, effects, Runes, & Charms.

As a reminder, we have firmly set expectations that balancing should be expected during Season 0 through the launch notes. pic.twitter.com/8BLLZ1GjhE

The new launch caught the attention of traders as AXS rallied on the daily chart on 24 August.

At press time, the AXS token was trading at $14.70 after receiving a 3.08% uptick. But the market conditions still put the token at 17.2% losses on the weekly chart according to CoinMarketCap.

Waiting for the sunshine

Despite the bullish activity on AXS, there are still concerns about the gaming industry in DeFi. With the onset of the crypto bear market, GameFi has suffered all the same after peaking out in mid-2021.

This is further reflected in Axie’s user data during this course.

According to data from Dune, daily new accounts have dropped to below 100 in recent weeks.

This is a far cry from its peak during July- August 2021 as shown below. 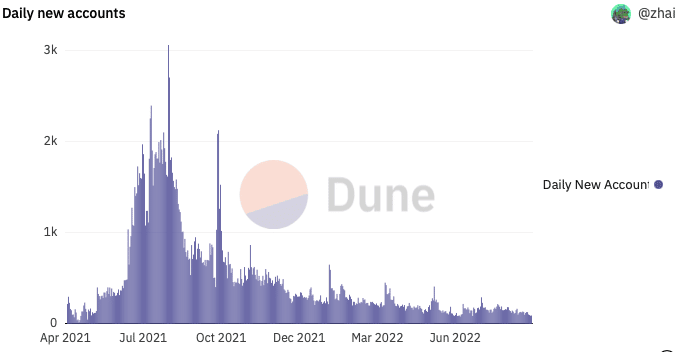 But Axie is attempting to revamp the course of GameFi on its “digital nation” with the new launch. According to Axie, SLP rewards have been added to Origin’s ranked gameplay mode and completely removed from Classic (v2).

Also, users will be allowed access to NFT Runes & Charms which can be created using SLP tokens, and Moon Shards that can be minted on Ronin.

Despite the failure to attract new users, Axie’s current users have remained loyal to the protocol.

With the data below, we can see how users have remained stagnant without any major shifts in activity.

There was also a huge spike in activity to 79.5K users on 12 August after news of Season 0 was initially conveyed.

As Axie attempts to build a new armory, there are high expectations on it now.

The token has also seen an uplift in sentiment with the release of the news. But eventually, token movements are usually decided by the general sentiment of the market which continues to be at risk.