India: Latest crypto scam might scare you of investing in new tokens


Shiba Inu [SHIB], the renowned ‘meme-token’ has witnessed significant support from all over the crypto community. Owing to this, various dominant buyers have flocked in to buy the token. And, SHIB’s burning mechanism continues to impress them.

Binance, the largest crypto exchange continues to show support to the SHIB community despite hiccups. This time Binance Card holders, launched in Argentina, could use SHIB to make their purchases and pay bills at over 90 million Mastercard merchants worldwide, both in-store and online.

Following the collaboration, the flagship token did witness some unprecedented traction across the entire crypto network. Especially, the dominant buyers, whales, as they flocked back to acquire the token.

Needless to say, the said increase in demand also led to an intense SHIB burning procedure to potentially aid its price to register new heights. This case was no different. Especially, now that the community released a new website (ShIB Superstore portal) that burnt Shiba Inu.

At the time of writing, roughly 390 million SHIB moved from circulation over the past 48 hours. Part of it was wired with help of Amazon giant and the new SHIB burn website.

Furthermore, as of 24 August, a total of 213,067,021 SHIB were removed from the supply of the second most popular canine token in circulation. The same occurred in 14 transactions as seen in the tweet below.

In the past 24 hours, there have been a total of 213,067,021 $SHIB tokens burned and 14 transactions. Visit https://t.co/t0eRMnhnPL to view the overall total of #SHIB tokens burned, circulating supply, and more. #shibarmy

A day ago, over 105,084,459 SHIB tokens were removed from circulation in 23 transactions. Herein, a part of the said amount was removed via Amazon and the new SHIB burning protocol.

The aforementioned development on the network saw Shiba Inu’s burn rate surge by 100%, as per data from the token burn tracking portal Shibburn.

At press time, the burn rate had registered a fresh 87% uptick. 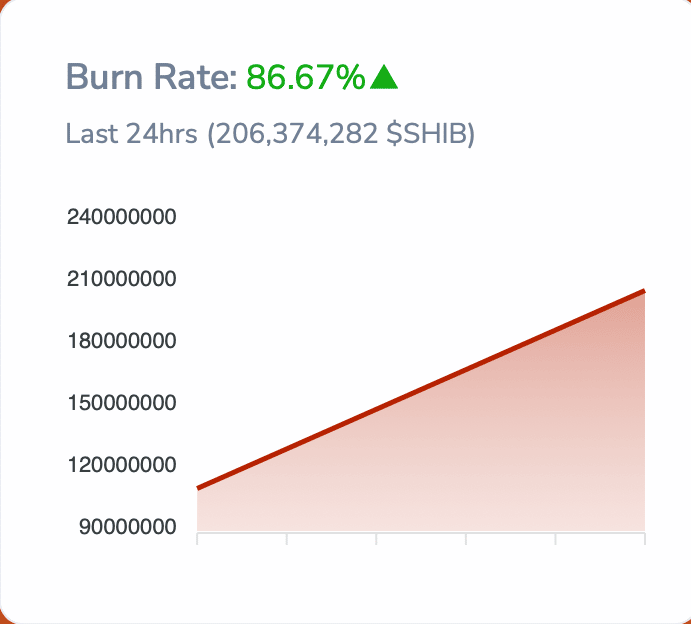 Having said that, one should always maintain caution as things could change anytime here. Consider this, just 48 hours ago, SHIB dropped in whale ranking as 1.4 trillion SHIB was dumped in the market.