PLC Ultima: Bridging the gap between traditional business and the crypto world


Curve Finance [CRV]‘s  current status in the DeFi may have left its investors in uncertainty. This is because the Total Value Locked [TVL] of the Decentralized Exchange (DEX) took a big hit over the last seven days.

DeFi analytics platform, DeFillama noted that there has been a drop in the overall TVL worth with CRV taking a 7.05% decrease. Compared to others, such as Lido Finance [LDO], and Uniswap [UNI], the CRV decline was not terrible. In fact, the coin had surged 3.24% over the past 24 hours despite a significant decline in the crypto market at large.

A recent report by Dune Analytics encouraged CRV investors to take note of some happenings. Dune Analytics reported that CRV’s performance has been unencouraging  on the average in terms of its average volume share across the DeFi liquidity pool. Based on the report, CRV volume pool had reduced realistically from its high on 13 May.

At press time, it was only a 19.5% volume share. The average stable coin volume was , however, impressive with a  46.7% share. At large, the average Daily DEX  volume was worth $2.46 billion.

Another aspect where the report asked investors to look at was the CRV emissions. Dune noted that the incentive which decreased by 15.90% has been distributed, therefore generating more revenue for Liquidity Pools (LP) and providing traders with enough liquidity.

While the volume pool data may not be what investors may have expected, the emission data offers some relief. Additionally, the user metrics was considered an important factor to monitor. At press time, the CRV retention rate was on the rise after 17.6% of the cohort were used between 6 June and 12 June.

So, how has this data affected the on-chain state of CRV?

Despite the improvement on its user retention, the active addresses have declined in the last 24 hours. Although there was an uptick between 16 August and 18 August in this regard, Santiment revealed that  the 24-hour CRV active addresses had dropped to 879.

As per its price momentum, investors may still need to watch their excitement over the recent uptick. This is because two major indicators signaled a possible drop in its price. First, it was the Relative Strength Index (RSI) revealing a bearish momentum with its value at exactly 32.00. The Moving Average Convergence Divergence (MACD) was below the histogram midpoint as the seller pressure (orange)  also stayed above the buyer momentum (blue). 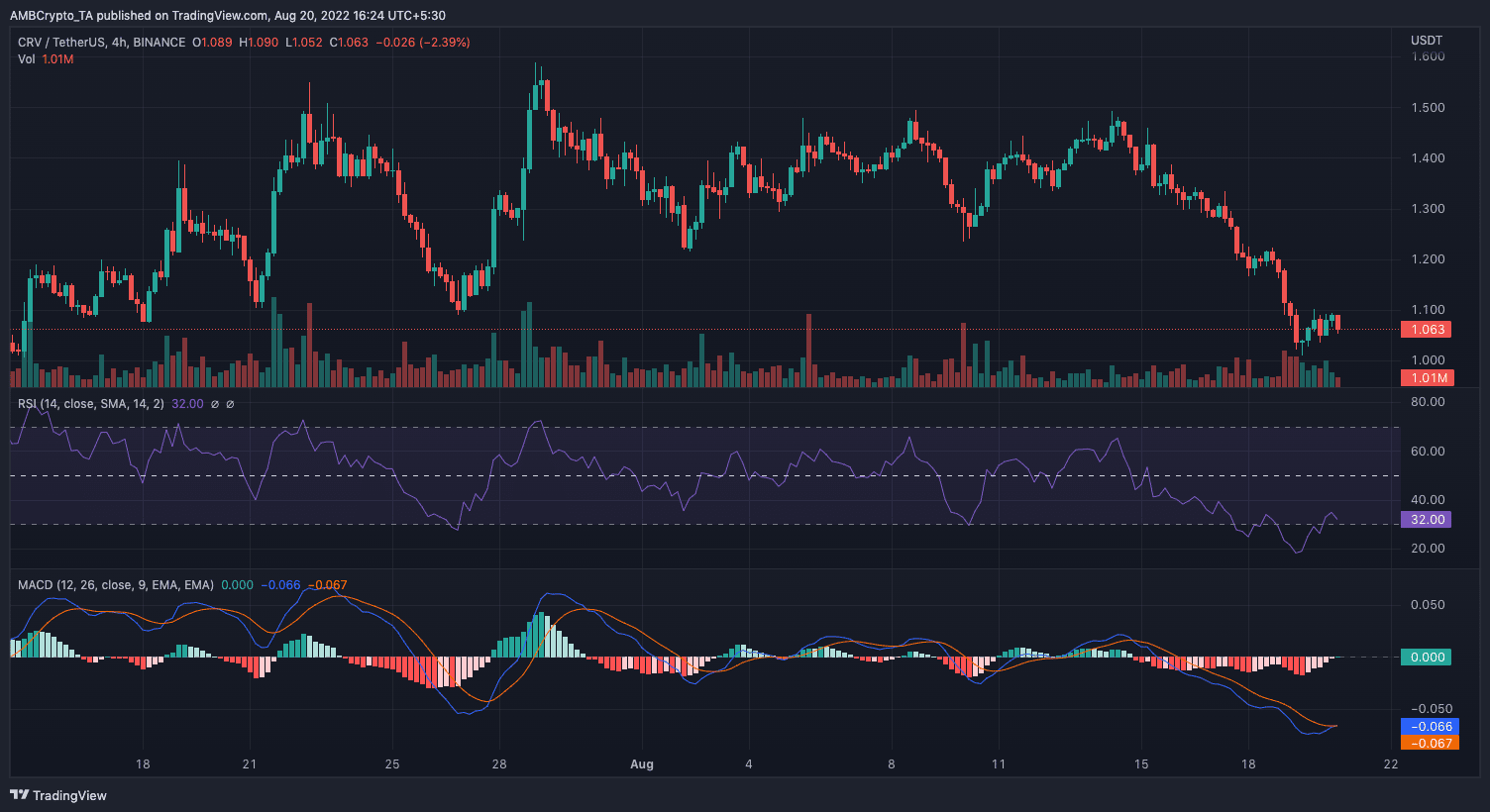