BNB token is beginning to lose attention in the market after another lacklustre week.

The Binance governance token has seen swings in the past which have lost their pace recently. The token subsided with bullish activity as top crypto assets gathered strength in numbers from the market recovery.

But a late sell-off on 15 August has seen the profits dry up as quickly as they came. This left the BNB token at $317.98 during press time with no significant price swings this week.

However, the Binance ecosystem has been active throughout this period with several announcements in hand.

As per a BSC News update, lending protocols are beginning to gain traction on BSC DeFi. The update talks about the top performing projects on Binance’s DeFi by social mentions.

Venus Protocol continues to lead the march by social volume along with a TVL of $1.15 billion. At a distant second is Valas Finance which has accumulated over $43 million by 15 August.

BSC News has also updated the weekly on-chain performance of the BNB Chain in the past week. The network executed almost 24 million transaction during this period while adding over 1.83 million wallet addresses. 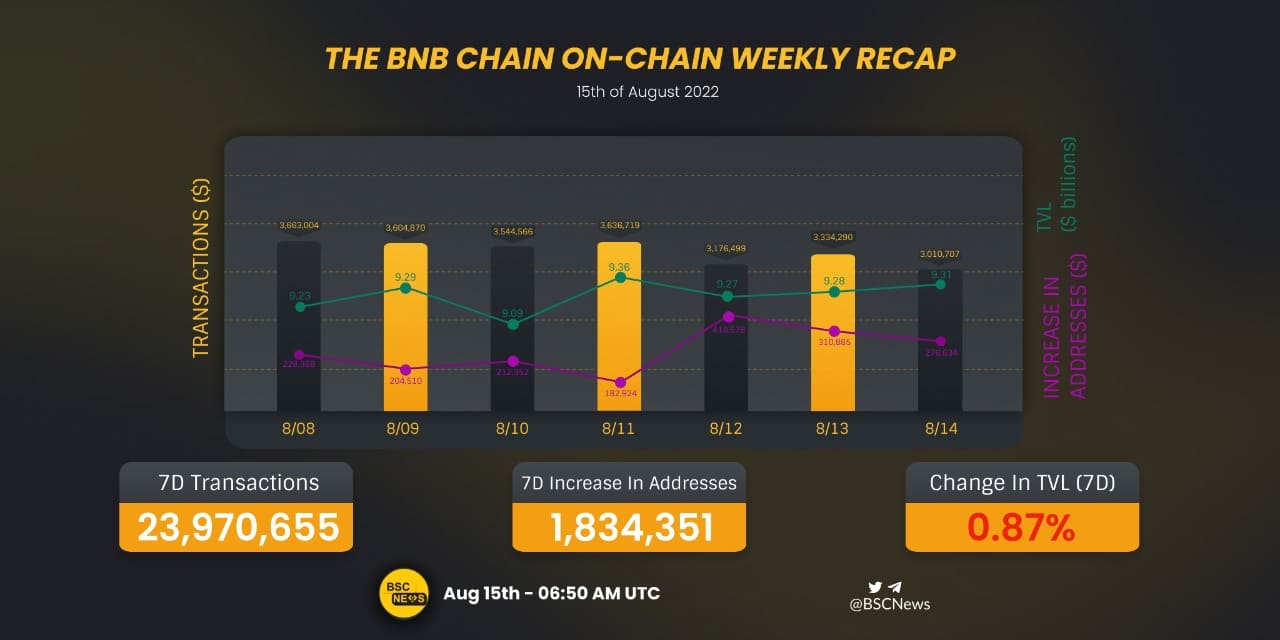 Binance has also revealed of salvaging over $450K from a recent Curve Finance hack.

The initial hack happened on 10 August of over $750,000. Binance CEO Changpeng Zhao claimed that the team was still working to recover the remaining funds.

Binance froze/recovered $450k of the Curve stolen funds, representing 83%+ of the hack. We are working with LE to return the funds to the users. The hacker kept on sending the funds to Binance in different ways, thinking we can’t catch it. 😂#SAFU https://t.co/Ekea9moeAw

What does the data say?

Despite the consolidating prices, BNB has been able to maintain a steady user activity on the network.

As we can see in the following chart, active addresses dropped heavily in patches but have increased gradually in the past month.

At press time, there were over 6250 active addresses on the Binance network according to Santiment.

The BNB token has been expected to escape the inflation headwinds. This was particularly evident in the previous week as profitability was ranked at monthly highs as per the MVRV charts.

After prices stagnated towards the weekend, we could see the falling trend in profitability for traders on the network.

A price breakout can be expected for BNB in the coming weeks since the market has been experiencing volatility in recent days.

Despite this, there has been a general upturn in price movement of late which is expected to push the BNB token up in the charts.