Ethereum: Here’s everything you might not know about Merge

It was a similar case on 30 July when it hit $24,500 with investors hoping $25,000 was unavoidable. However, BTC investors may likely need to wait before the supply succumbs to investors’ expectations.

According to a CryptoQuant analysis, the current market cycle could be far off attaining a long bullish momentum.

The CryptoQuant analysis noted that it may not yet be time for investors to jubilate. The analysis used the Bitcoin futures market to maintain its position of a cautious take.

Additionally, as of yesterday (11 August), BTC recorded its highest liquidation volume since late July. Reportedly, the exchange inflow spent output volume bands revealed that many Bitcoin addresses moved their holdings to exchanges. In this regard, the analysis stated,

Looking at CoinGlass data, BTC futures market liquidation amounted to $15.49 billion on the Binance exchange alone over the last 24 hours.

Long position liquidated was 48,72%, while shorts were 51.28%. On the other hand, the BTC futures open interest rate has increased since July, meaning that traders have been actively trading the BTC market.

There has been a total of $13.81 billion in futures trades at press time. So does this interest uptick mean traders were shorting Bitcoin in line with the CryptoQuant projections?

With BTC closing in on $25,000 for a while, investors may expect it to hit the milestone soon. However, the sentiment revealed by the Awesome Oscillator (AO) may be otherwise.

Although the AO remained above the histogram midpoint with a bullish edge, the current state also shows bearish twin peaks. 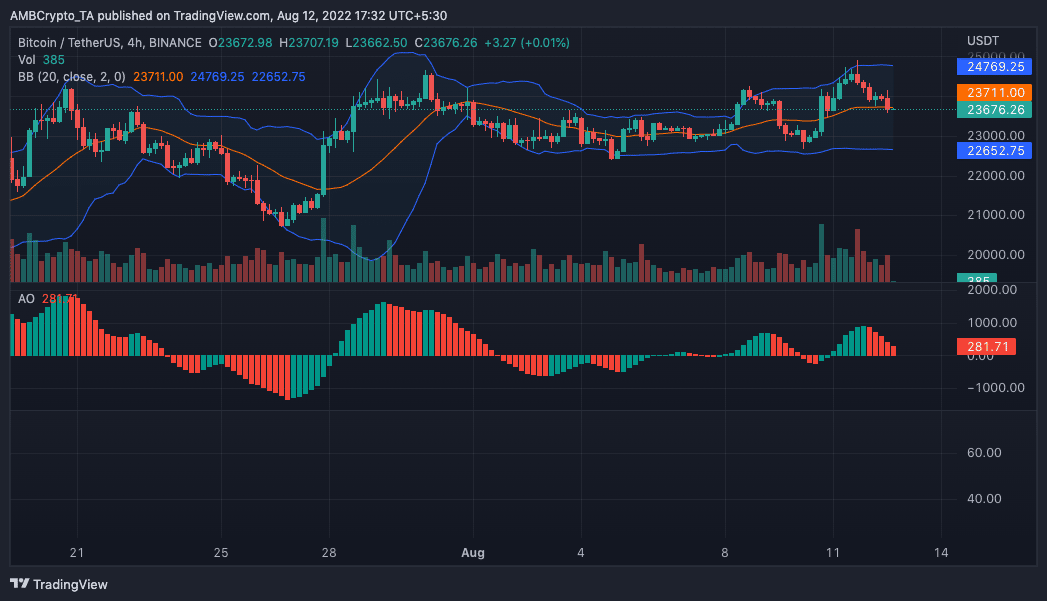 With Bitcoin not entirely all over the bears, it may be time for investors in the overall crypto market to watch where the market movement resides next.